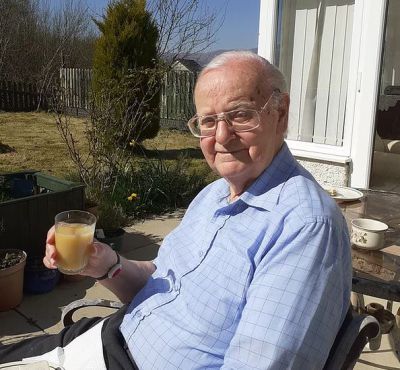 My name is Arnold Matthews, if it was Matthew Arnold I would be famous, but as someone said, I would also be dead!

As a writer and Poet I would like to think that I might achieve some slight recognition as I can genuinely say that my passion is to share my conviction of what a privilege it is to have been given a long tenure of life with the great gift of intelligence that comes with the homo sapiens. Yes the animals also possess a wonderful intelligence within the bounds of their instinct and the Beaver can build a Damn but they cannot build a Skyscraper.

So who am I? Born into a devoted Christian family, brought up with a belief in God as my spiritual Father, having a special Son known as Jesus Christ, who had the mission given him, being worthy to bring about the atonement required for bringing about the reconstruction of a resurrected body that would endure without corruption, albeit with an indestructible material supported by the nature of God's eternal sustenance.

After active rolls in the Methodist Church as Leader of the Circle Eight Youth Club and the Sunday School leader and being supportive of the Church generally, in my early thirties I spoke to about eight or nine Ministers of the Church asking them what they actually believed. None of them could give me a satisfactory outline of their beliefs in terms of structure, where we may have come from, what was the real purpose of this life and indeed where we might end up with a purpose of existing for any useful purpose. This brought about the need to reflect and so for a couple of years I left attending the Church, when eventually my wife and I had a visit from the Missionaries of the Church of Jesus Christ of Latter Day Saints. For me they taught us doctrine that made sense of the questions I had been contemplating and although my wife did not at that time have as strong a conviction that I was receiving, we agreed to be baptised as a family. My wife did receive her conviction nine months later and became a very convinced member of the Church through active participation and practice in the Church's teachings. Our three children have kept active and now in their sixties have completed Missions and are fine examples of Latter Day Saints this day. I have been ordained to the Melchizedek Priesthood and received the ordination of Bishop. While this calling is a permanent Church position, we are actively engaged in that calling only while asked to lead a Ward, or Church ministry of a congregation. We are then released and another called but usually we become High Counsellors on the Counsel of the group of Churches in the larger area of what is termed a Stake.

In the Church we receive no payment for these Services and I would not be comfortable preaching the Gospel for money.

So, the days of making money and business are past, my senior years are to use the talents that I have of writing to bring about some hope and benefit to my readers, to support the efforts of charity for needy people who have been affected by Covid-19. The novelty of my Plan along with my work, may create an element of interest and hopefully they may remember the name of Arnold Matthews with affection and satisfaction.